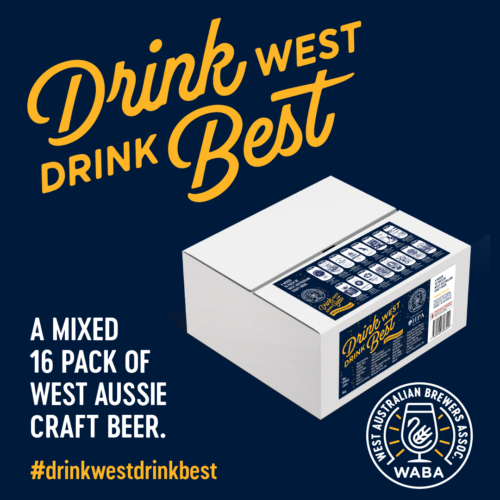 As part of the ongoing Drink West Drink Best campaign, where West Australians are being encouraged to think local and support their beer industry, the WA Brewers Association (WABA) has once again released a mixed carton of some of WA’s finest beers.

In partnership with Australian Liquor Marketers (ALM), the Drink West Drink Best mixed carton features 16 West Australian breweries and can be found in Cellarbrations, The Bottle-O and Porters Liquor stores across WA.

WABA President Andy Scade said following the success of last year’s mixed carton and the strong appetite for supporting local, it was always on the cards to release another mix and give local breweries the chance to reach consumers they may not have before.

“We want people to be able to enjoy the diversity of WA’s beers – we’ve got incredible breweries all over the state making world class beer.

“The mixed carton represents breweries from as far north as Kalbarri to Esperance in the south – the carton lets you take a journey around WA, while supporting local and experiencing some of the best producers the state has to offer.

“It’s the perfect way to explore WA beer – especially for those who may not have stepped into the world of craft beer before.”

The 16 breweries and beers found in the mixed carton include:

The mixed carton release is limited and only available while stocks last. WABA would like to thank Hop Products Australia (HPA) for supporting the 16 breweries involved. West Australians are encouraged to support the ongoing campaign message by using the hashtag #drinkwestdrinkbest.